What is 3D Cell Culture?

Cells in vivo experience a complex, three-dimensional environment that exposes them to circulating molecules, neighboring cells, and the extracellular matrix (ECM). With these environmental cues in mind, biologists have developed more physiologically accurate methods for culturing cells and tissues, including new media formulations and co-culture techniques. Back in the early days of cell culture, it was all we could do to keep cells alive and growing. Now, we have more ambitious goals – keeping cells alive, growing, and behaving just as they do in the body.

3D cell culture represents yet another step towards this goal by focusing on mimicking normal cell-matrix and cell-cell interactions. Along with microfluidic or organ-on-a-chip systems, 3D cell culture offers researchers an unparalleled ability to recreate physiological compositions and
spatial arrangements of cells in vitro.

We think we’re made of cells, but they are far from the whole picture. In fact, by mass, the most abundant proteins in our bodies are ECM proteins – the nonliving material outside of our cells that provides a physical scaffold, barrier, and mechanical and biological signaling.

However, that last role was underappreciated until the isolation of ECM proteins in the 1960s and 70s. These newly available materials led to compelling evidence that the physical cellular environment is far from inert, but acts as a biological and mechanical signal to regulate cell-type specific function, differentiation, and morphology1.

Since then, remarkable progress has been made in 3D cell culture, including organoids, miniature organ-like structures that self-organize in 3D culture. Additional advances in technology, including microfluidics and engineered synthetic ECM hydrogels, have furthered our understanding of the mechanical and microenvironmental cues that govern cell behavior2,3.

2D vs. 3D Cell Culture
Simple, inexpensive, and reproducible, traditional or 2D cell culture is the mainstay of biological research. Meanwhile, 3D cell culture systems feature increased complexity for increased faithfulness to the in vivo environment. The primary changes to cells in 3D are rather obvious – shape, motility, and polarity are all affected – but can have important secondary, less-obvious tissue-specific consequences.

Adhesive, topographical mechanical and soluble cues in 2D and 3D4

A lot changes when a cell moves from 2D to 3D culture, but the most obvious is the mechanical environment. The stiffness of glass or plastic is multiple orders of magnitude higher than that seen in soft tissues, which have a consistency like Jell-O or cream cheese. Stiffness directly affects cell adhesion, spreading, migration, and differentiation. The mechanics of 3D cell culture, on the other hand, are quite different. ECM gels feature lower stiffnesses, local structures like collagen fibers, and pores that encumber migration and invasion. ECM proteins are also readily remodeled by the cells themselves by fiber bundling and degradation. Together, these can lead to reduced proliferation, altered migration, smaller and more distributed focal adhesions, and directional cell elongation along fibers.

The 3D gel itself is capable of sequestering biomolecules and 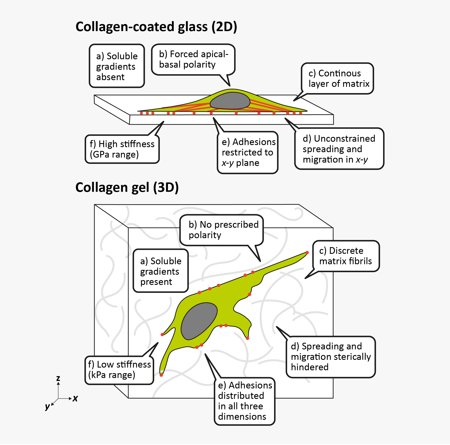 Finally and most visibly, cells in 3D culture can create 3D structures, rather than being constrained to a single layer in 2D. Many outcomes in morphogenesis and development are three-dimensional, like branches, hollow spheres, tubes, and vascular networks. In multicellular aggregates, the increased dimensionality also allows for increased cell-cell interactions. The functional consequences are evident in cell-dense systems like the liver, where interactions with non-parenchymal cells contribute significantly to hepatocyte function8, and muscle, where spontaneous contractions can be coordinated across all the cells in a microtissue9. Spheroids are a scaffold-free variant of 3D cell culture where aggregated cells may attach to one another and produce their own matrix, reminiscent of the dense organization of solid tumors. Much like solid tumors, tumor spheroids can develop spatial heterogeneity, especially gradients of nutrients and oxygen that alter cell metabolism and susceptibility to anticancer drug10.

While more technically challenging than traditional cell culture, 3D cell culture supports tissue-specific function and physiological cell-cell and cell-matrix interactions. These factors can contribute to a number of advantages and unique opportunities for 3D cell culture:

3D cell culture is limited by cost and ease of use:

Unsurprisingly, 3D cell culture is great for studying phenotypes that are poorly reproduced in conventional 2D cell culture, such as amyloid accumulation, chondrogenesis, angiogenesis, cancer metastasis, and morphogenesis. Many of these processes involve cellular behaviors that are intrinsically tied to cell-matrix interactions, whether through synthesis, degradation, directed migration, or mechanical cues.

Similarly, 3D morphogenesis in organoids is unlike anything in conventional 2D cell culture. Unlike differentiation of a 2D monolayer of stem cells, 3D aggregates of stem cells exposed to differentiation factors and basement membrane ECM proteins can spontaneously self-organize into tissue structures; in this case, optic cups. Without the constraint of a stiff, 2D substrate, the organoids underwent mechanically driven tissue deformations, just as they do during development17.

Self formation of an optic cup like structure in 3D culture. Figure from Eiraku et al17.

3D cell culture is highly customizable, as it should be – every cell type in vivo experiences a different set of chemical and mechanical signals, and pursuing greater physiological relevance requires cell type-specific modifications to cell culture.

The defining choice in 3D cell culture is the type of ECM, which might be any combination of18:

Besides choice of ECM, you might pursue other tissue-specific choices for recreating an organ in a dish, such as spatial control over the placement of cells, ECM, and soluble factors; different cell types; and fluid transport between compartments. Many 3D cell culture systems are combined with microfluidics, which can provide:

In the case of gut-on-a-chip, Caco-2 cells exposed to fluid flow and stretch, but not Caco-2 cells in static membrane culture, displayed villus-like differentiation and morphology and had increased mucus secretion, glucose uptake, and drug metabolism24.

Formation of intestinal villi by Caco 2 cells within in Gut on a Chip cultures. Figures from Kim & Ingber24.

Blood vessel biology in particular has benefited greatly from the combination of 3D cell culture with microfluidic organ-on-a-chip technology. For starters, blood vessel formation and maturation are only possible to observe in 3D cell culture. (In 2D culture, endothelial cells appear a little different from other mesenchymal cells.) Only in 3D cell culture do they demonstrate the ability to form branching, lumenized vascular networks. Researchers interested in angiogenesis have combined 3D culture of endothelial cells with microfluidics to great effect, establishing interstitial fluid flow, shear stress, and growth factor gradients as key signals in blood vessel sprouting25. Similar systems have also been used to study blood vessel anastomosis, the blood-brain barrier, and tumor cell extravasation26.

Organs-on-a-chip also reflect an appreciation for fluid transport that is often overlooked in other cell culture systems. For example, in a massive feat of coordination, groups across multiple universities worked together to study functional coupling of different microfluidic organs-on-a-chip. They passed conditioned media from one organ model to another in sequence to validate the transport, metabolism, blood-brain barrier permeability, and toxicity of known compounds. Their results not only showed agreement between organ-on-a-chip and clinical data, but also demonstrated the use of sequential fluid transport to study different organs’ effects on downstream organs27.

From bench to benches

Of course, these more complex systems may be better models of the body, but the consequence is often more work for the biologist!

Many specialized, investigational 3D culture systems require in-lab microfabrication, syringe pumps to drive fluid flow or pressure, and engineering expertise. Variability in 3D systems between labs makes it hard to generalize results, particularly without a 2D culture internal comparison. 3D assays can be more labor-intensive and, as a result, lower-throughput than possible in 2D culture. Despite the clear advantages of 3D cell culture, adoption by the broader scientific community relies on addressing usability, validation, and researchers’ needs.

As a result, accessible, customizable platforms have been developed to address many common limitations of 3D cell culture:

Notably, the OrganoPlate integrates microfluidic chambers into a standard well plate format, allows spatial control over multiple ECM and cell components, and can be customized to the tissue system and biology of interest. It is a flexible platform that allows the researcher to choose the variables that fit their assay: ECM, cell type(s), co-culture, and perfusion.

As a result, hundreds of individual ECM-containing tissue cultures can be assayed in parallel. Barrier integrity was reported from a screen of compounds in 357 different intestinal tubes using a fluorescent dextran-based assay28. The same technology was also used to create a high-throughput vascular permeability assay: a plate of 96 perfused, flow-exposed blood vessel tubes, demonstrating its customizability31.

Similarly, while the supporting ECM gel was cell-free in these publications, it would be simple to include stromal or immune cells in the ECM, components of interest in cancer, and stem cell biology. Different drugs or microbiota could be applied to the apical lumens. The possibilities are only limited by the creativity of the researchers! It’s a system that, with remarkably little fuss, can be used to study quite complex in vitro tissues. Even as it incorporates many of the advantages and capabilities of 3D cell culture and microfluidics, it’s also designed to sidestep common throughput and usability downsides.

Get started with 3D cell culture in your lab right now...

Copyright to every image belongs to the original source, linked as a reference in each text in or around the image.