Leiden, October 10, 2022 – Scientists from MIMETAS and Galapagos used a high-throughput 3D microvessel-on-a-chip on the OrganoPlate platform to study angiogenesis in the context of systemic sclerosis. This article has just been published in Scientific Reports.

Endothelial cells play a central role in the control of vascular function and is involved in all aspects of vascular homeostasis as well as in physiological or pathological processes like thrombosis, inflammation, or vascular wall remodeling. In systemic scleroris (SSc), a chronic autoimmune connective tissue disease, endothelial damage is an early and central event and leads to vascular impairment. Consequently, angiogenesis is dysregulated in SSc and therefore cannot facilitate efficient vascular recovery. The exact cause and mechanisms behind this endothelial damage remains unclear. Therefore, physiologically relevant models are urgently needed to study angiogenesis in SSc and to better understand the etiology behind the vascular impairment seen. 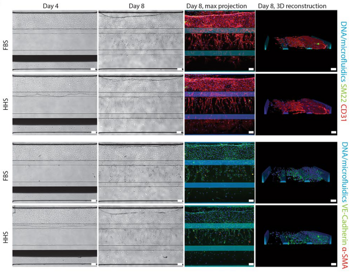 Most experimental systems used to study angiogenesis in SSc rely on animal models that do not always translate to human condition, are ethically problematic and are costly. Importantly, most cell culture models use fetal bovine serum which is not physiologically relevant. Traditional 2D in vitro models have limited throughput and demonstrate short-term stability of the capillary-like structures; these models also do not recapitulate the typical hallmarks of endothelial cells during angiogenesis in vivo such as lumen formation and differentiation into tip and stalk cells.

In this publication, a 3D angiogenesis assay/microvessel-on-a-chip to study systemic defective angiogenesis in SSc is described. This in vitro assay allows the study and monitoring of all stages of angiogenesis, from sprouts formation to sprouts stabilization and degradation in the presence of different triggers and compounds. To further increase the relevance of the model, HMVEC angiogenic sprouting assay was optimized to be compatible with human derived serum, which enabled a unique study on the effect of SSc patient derived serum on the stability of sprouts.