Leiden, June 16, 2022, Scientists from MIMETAS introduce a platform for routine grafting of liver and other tissues on an in vitro grown microvascular bed. This article has just been published in Angiogenesis. 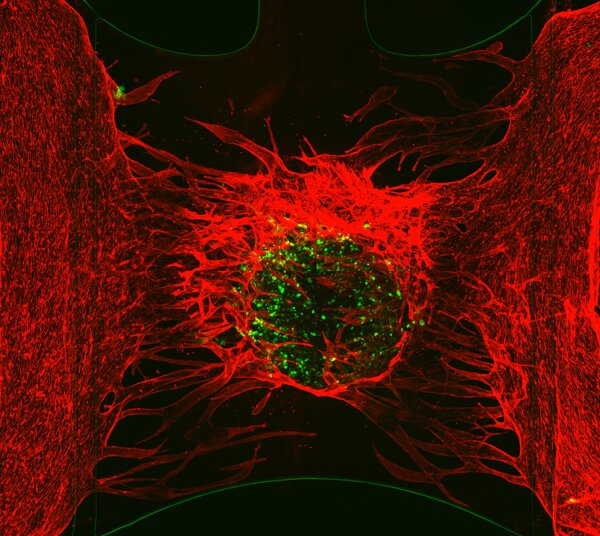 Recent advances have been made in recapitulating the human liver microenvironment and the ability to emulate the liver architecture and functionality in vitro. Spheroids and organoids have also emerged as promising tools to study organ physiology and to conduct drug response studies. Although the liver is a highly vascularized organ, most liver models still fail to incorporate structured and functional sinusoidal vascular networks. It has been shown that avascular organoids and spheroids with a size of 100 μm or larger are characterized by poor cell viability and functionality. Moreover, endothelial cells contribute to tissue growth, maturation, and functionality. Therefore, to fully recapitulate the human liver in vitro, it is essential to incorporate vasculature.

To introduce endothelial cells to liver tissues, various in vitro approaches such as have been taken. Although functional for studying cell-cell interaction, these strategies have not yielded stable, accessible or perfusablemicrovascular networks. In vivo transplantation using spheroids/organoids and mice has also been tested but suffer from a lack of translatability, limited scalability, high cost, and ethical problems. As such, there is a need for a readily available platform that allows for routine vascularization of tissues in vitro.

In this publication, a platform for routine grafting of liver and other tissues on an in vitro grown microvascular bed is introduced. This platform, the OrganoPlate Graft®, was used to establish a vascular bed through induction of angiogenesis from two main endothelial vessels, upon which liver microtissue was grafted. Anastomosis of the microvascular bed was observed, resulting in a stable perfusable vascular network. The conceptual application of the vascularized system was also shown by mimicking veno-occlusive disease and providing loss of perfusability as a phenotypic readout. The OrganoPlate Graft is robust and versatile platform envisioned for in vitro grafting of a broad range of tissues, ultimately replacing animal grafting.