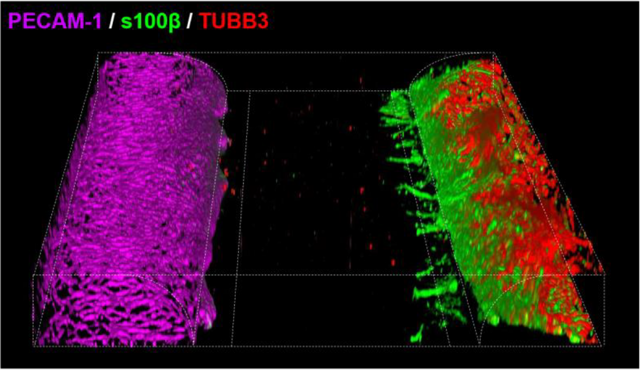 Leiden, December 15, 2021 – Scientists from MIMETAS introduce a new neurovascular unit on-a-chip model to study ischemic events in the human brain. This research has just been published in Fluids and Barriers of the CNS.

The blood-brain barrier (BBB) is essential for controlling the entry of compounds into our brain. The structure that contributes to the BBB’s controlling function is called the neurovascular unit (NVU). This unit stops harmful compounds from entering the brain while allowing a selection of molecules, such as oxygen, to enter freely. Dysfunction of the NVU, and therefore the BBB, can be caused by many neurological disorders, trauma, or stroke. Strokes are the second most common cause of death worldwide, with 80% of ischemic nature, resulting from the disruption of blood flow by a blood clot. To date, only one treatment has been approved for ischemic stroke, which must be administered within 4.5 hours of the event, as it otherwise worsens the patient's outcome. Therefore, there is an urgent need for better therapies

Knowing that in vivo models lack predictability due to interspecies differences, and in vitro models lack physiological relevance, new models are required to deepen our knowledge about ischemic stroke and aid in the development of novel drugs. A valuable method to develop this model is organ-on-a-chip technology.

In this publication, MIMETAS’ scientists show the development of a 3D NVU-on-a-chip model that consists of primary brain endothelial cells in co-culture with iPSC-derived astrocytes and neurons. A protocol was developed to mimic stroke, which caused the model to display common features as seen in ischemic stroke such as reduced BBB integrity. The high throughput and user-friendly nature of the developed NVU on-a-chip model render it suitable for the routine experimentation necessary to gain a better understanding of the underlying stroke mechanisms and for screening anti-stroke drug candidates.